I hope you’re all enjoying digging into these weekly menu plan recaps because I’m loving cooking them up as a fun Sunday ritual. Plus, it allows me to share my favorite kitchen or meal prep tips as well as keeping me honest with making healthy recipes. I won’t lie to you, Pizza Hut almost happened this week except they don’t deliver to my new apartment, which is both the best and the worst thing all at once.

I will also admit that I very nearly drove to pick one of those bad boys up. The ONLY thing that stopped me from dealing that death blow to my mildly lactose intolerant stomach was the knowledge that I’d be wasting the food in my fridge.

Well, that and the fact that it was a million degrees outside.

I know I’m not the only one broiling this month (in fact I hear this thing called ‘Summer’ is fully upon us) and I’m nearly positive that most of you also can’t afford to get by on take-out until it’s boot season again. Probably because of all those aforementioned boots you’re buying at the Nordstrom Anniversary Sale I keep hearing about. It’s okay, I’d choose the boots too.

Having tried a straight week of all smoothie bowl dinners all the time, I have recognized that variety is the spice of life. So are spices actually, which smoothie bowls also tend to lack. So what is a variety craving, healthy food loving, minorly sweating gal supposed to do?

Introducing the humble sandwich, pinch hitting in our dinner lineup.

Earlier this week I mentioned that trying to recreate Subway’s cold cut trio in your kitchen ain’t the way to a rockin’ bod, and by that I mean your insides will thank you if you step away from the highly processed deli meats every once in a while.

First up was this Greek yogurt chicken salad goodness from Damn Delicious that I made up as an open-faced sandwich on a slice of whole wheat.

Have you ever tried pouring out the pepper from the shaker side having accidentally opened the wrong part of the lid on a Costco-sized jar? No? Just me? It turns out that is one rad mistake to make in this recipe because that was the correct amount of pepper. We added in some mild curry powder as well and ended up with my favorite meal of the week.

It’s easy to use a store bought rotisserie chicken for this one, but if you’re stubborn like me then I can now personally attest to the Instant-Pot-on-the-porch trick to keep all the heat outside where it belongs.

This baby made a reappearance later in the week as The Best Leftovers of All Time.

This party sandwich from the Kitchn was probably the one I was the most excited to make. It not only gave me an excuse to make a (probably unnecessary) humongous sandwich, I also got to do it on a loaf of bread from my favorite local bakery here in Portland, Grand Central. This one went over very well at my weekly dinner party where 2 of these with a gazpacho & salad side fed about 10-12 people. You definitely need a good bread knife to make this one work though.

Because I love my vegetarian and vegan friends who were both in attendance, I also turned on my oven to make this oven “fried” tofu recipe that I subbed in for the meat & cheese on one of the sandwiches. You’re welcome (okay actually it was the bomb I can’t even pretend). 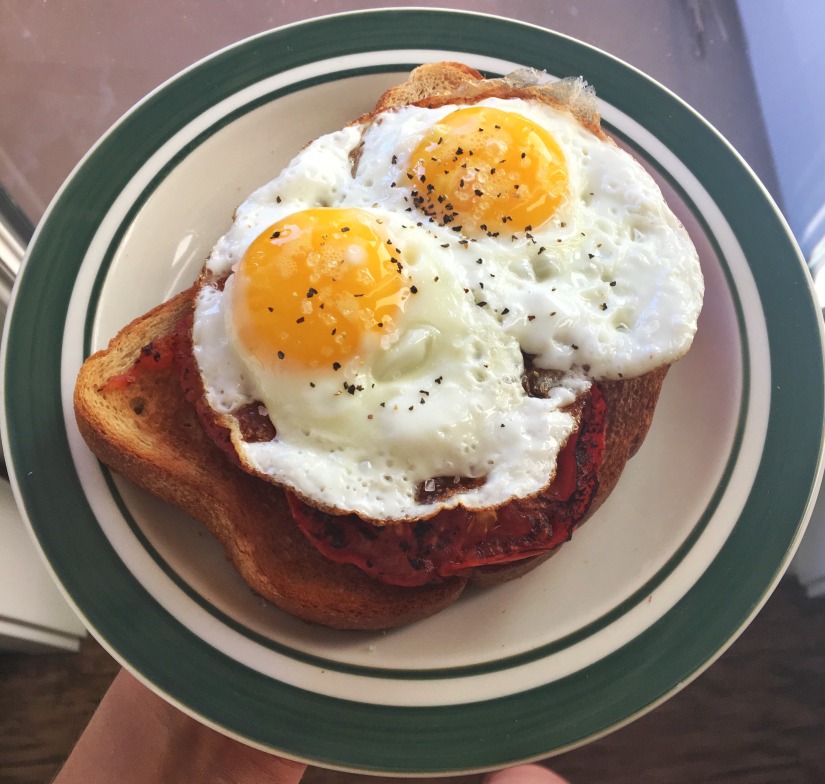 And then there was the day where I just really wanted breakfast for dinner, which is actually something I always want but I’ve somehow found a man who hates most breakfast foods.

So when Mr Doesn’t Cook is away, this gal turns to her homegirl Martha and makes some charred tomato & fried egg garlic toast while finally finishing the last season of Sex & the City. It might be 13 years after that show ended but it’s only been…8 since I started watching it in college. I’m a notorious never-ender, okay?!

For real though, this was worth the 8 minutes I had the pan going to make those beauteous sunny side up eggs and perfectly blackened tomatoes. I put this one up on my IG story while making it and had one confirmed jealous onlooker.

Last up on our fake sportsball roster was the simple but beloved turkey club. Buy the bacon pre-cooked and you won’t even have to debate baking vs frying the raw stuff. Add in some hummus & avocado on that whole wheat goodness and you’ve got the perfect balance between happy and healthy.

I’ll be back on Tuesday with my next menu plan for an extra healthy week!

Hey all! I'm a healthy food & fitness blogger with a strong meal prep game and a love of science-backed wellness tips. By day I work in a lab and at night I moonlight as a kitchen dabbler. View all posts by ThisMissCooks

0 thoughts on “Healthy Summertime Dinners I Actually Made This Week”